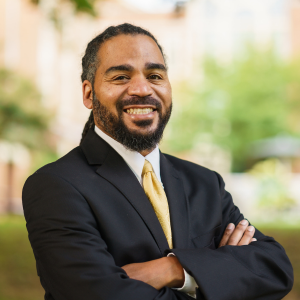 1. How do you define success for yourself? What has helped you to be successful?

I define success very broadly. I want everything to “work” and it has to work for my life – writ large. I think the key issue for me is balance. I am fortunate to operate from a unique space at Wake – I’m in class AND I’m an administrator. I’m blessed to be a husband and a father. I can’t fail at Wake or at home. Finding the balance has been the key for me. Though I’m a fan of balance, I need my trusted folks to let me know when I’m “tilting” too far one way or the other. It’s important to have colleagues/peers/friends/family that you trust to speak into your life. Trust isn’t easy but it is so worth the work.

2. Think of a time that you faced a challenge, obstacle, or roadblock. How did you get through that and what did you learn?

The biggest challenge for me was starting the Magnolia Scholars Program. There was a generic idea – “supporting First Generation students” – but there was not structure put in place. On top of that I was returning to Wake. The interview team was full of legends in my mind – Herman Eure, Tom Phillips, Martha Allman, Paul Orser, Pat Lord, etc. The challenge was making something new that fit neatly within the WFU ways of doing/being. What I learned to do was listen. I had to talk to those “legends,” current students, and new administrators. I had to run my ideas past others and take their responses seriously. Most people *say* that they seek other opinions but that was not my normal way of working. And, with starting the Magnolia Scholars, every meeting led to another meeting with someone else. It was frustrating to watch my ideas end of on the cutting room floor and exhausting to keep having one more meeting but, it was well worth it. When we fully launched the program we had support across the University. For students who are constantly (re)building WFU organization by organization, take the time to listen to other students and even stodgy old faculty/administrators (like me). Often a 30-minute conversation can give you that unexpected bit of information that makes all the difference.

3. Who are your people (either by name or role) who help you to be successful/confident/intentional/reflective/any other descriptor you want to use? And how have they helped you?

First is Camille, my wife. She has helped to ensure that I keep balance and appropriate focus. I enjoyed the working relationship with Tom Phillips because he and I could be honest about what we saw across the institutional terrain. My undergraduate advisors, Allan Louden and Herman Eure have continued on as life advisors and become friends. They give me an objective view of my actions/choices. They are honest in telling me what they think whether I like it or not. With all of these folks, Camille, Tom, Louden & Eure, it’s been about honesty. The first time you hear criticism from those you love, it hurts. It never doesn’t hurt. But, it always helps.

4. How did you find your people?

It was being honest with myself about who I liked and respected. Some of my advisors (Eure! and Louden!) were not “easy to like.” I had to open myself to accept earnest criticism. It wasn’t the criticism that only hurts. It made me better.

5. What advice would you give to Wake Forest students as they look for their people?

Listen. Argue. Fight. When you come to understand that you DID have a hole in your paper or that your perspective had an OBVIOUS bias, accept it. The criticism does mean that you were, arguably, wrong. Still, it’s not designed to hurt you but to help. It takes a minute to accept that.

As an undergrad or a budding young professional, we want to be the All-Star rookie that’s ready to play. You have the talent. We’ve known that since you were accepted. The issue going forward is how you engage that talent with the issues at hand. It’s not a mathematical word-problem if your budget doesn’t balance nor is it an issue of perspective if your marketing campaign falls flat. Make it work!